Provided insight into the role of aldosterone, the salt-retaining hormone, and the mineralocorticoid receptors in organs such as the heart and kidney. This has been valuable in advancing understanding of high blood pressure and heart failure.

Aldosterone is the physiological salt retaining hormone which acts in the kidney via mineralocorticoid receptors (MR). From the 1980s, a cardiovascular endocrinology team — initially at Prince Henry’s Hospital and then the Baker Institute — pioneered the nexus between salt and aldosterone in causing cardiovascular and renal damage. MR were shown to be expressed not just in salt transporting tissues like the kidney, but also in the central nervous system (Krozowski, Z et al. Proc Natl Acad Sci USA 1983), the heart (Pearce, P et al. J Hypertension 1988) and vasculature (Funder, J et al. Endocrinology 1989).

Aldosterone can only access and activate MR in the kidney because they are ‘protected’ by the enzyme 11β-hydroxysteroid dehydrogenase 2 (11BHSD2). Molecular biologists at the Baker Institute were the first to publish the gene sequence of the enzyme which led to major insights into a series of hypertensive disorders.

Aldosterone is an important contributor to heart failure, which can be blocked by spironolactone, a drug that has become the standard of care in progressive heart failure. Similarly, high blood pressure due to primary aldosteronism — which may be the cause of a significant proportion of people with hypertension — is associated with increased risk of atrial fibrillation, stroke and heart attack. These clinical advances have been built on the studies and insights obtained by researchers at the Baker Institute. 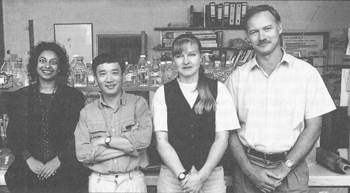