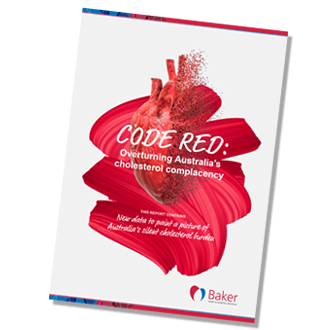 The findings in this report demonstrate a whole of healthcare system response is needed to reform cholesterol management in Australia.

The Baker Institute’s report, Code Red: overturning Australia’s cholesterol complacency, provides analysis of the first new Australian cholesterol data in nearly a decade.
The report examines MedicineInsight data over a ten-year period from 2010 to mid-2019 of 107,664 Australians who have experienced a prior cardiovascular event. This cohort of patients was being managed by GPs from general practice sites from each state and territory in Australia.

The findings in Code Red demonstrate a systematic and stepped care approach is needed to reform cholesterol management, in a way that unites the sector — from policy and political decision-makers, to the manufacturers, as well as the patient, clinical, and advocacy communities.

Click the image below to read the Code Red report.

Amgen Australia Pty Ltd provided funding for this research and procured the services of VentureWise Pty Ltd (VentureWise is an independently run, wholly owned commercial subsidiary of NPS MedicineWise) who contracted Baker Heart and Diabetes Institute to produce this Report. The Institute is grateful to NPS MedicineWise and in particular, the general practices and general practitioners who participate in the MedicineInsight program, and the patients who allow the use of their de-identified information for MedicineInsight.