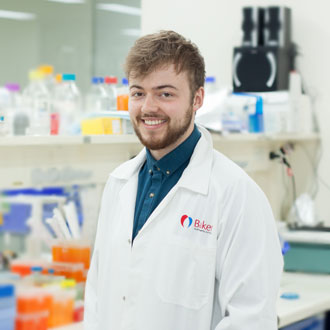 Dr Jonathan Noonan was awarded a BSc (Hons) Immunology in 2014 and then PhD in Infection and Immunity in 2018, both from the University of Glasgow. During this time Jonathan worked on several projects exploring the role of the immune system in cardiovascular disease. His PhD research leveraged his understanding of the immune system to develop and apply a new methodology for the molecular imaging of vascular inflammation, a study published in Theranostics. During this time Jonathan also worked on several projects investigating T cells in atherosclerosis, nurturing a fascination with the adaptive immune system and leading Jonathan to turn his focus towards the role of adaptive immune cells in health and disease.

In 2019, Jonathan was recruited to the Atherothrombosis and Vascular Biology laboratory by Professor Karlheinz Peter. Since arriving at the Baker Institute, Jonathan has established several research projects with Professor Peter, leveraging the Atherothrombosis and Vascular Biology labs extensive ability to model cardiovascular disease and explore the mechanisms by which the adaptive immune system contributes to chronic vascular inflammation.

Jonathan was recently awarded a CASS Medicine/Science Grant and CSANZ-Bayer Young Investigator Award to use single-cell RNA sequencing to explore the basis of adaptive immune dysregulation and chronic inflammation in the context of atherosclerosis. Dr Noonan holds honorary appointments at the Institute of Infection, Immunity and Inflammation at the University of Glasgow, United Kingdom; the Immunology Department at Monash University; and the Department of Cardiometabolic Health at the University of Melbourne.