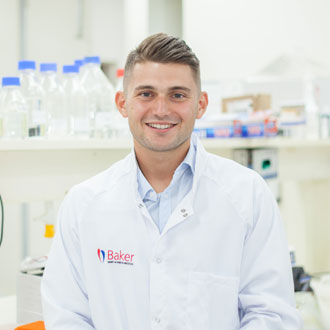 Early in his scientific research career, Crisdion has been surrounded by teams of world class researchers at the Baker Institute that have welcomed and guided his inquisitive nature as a young research scientist. During his undergraduate studies at Deakin University, he undertook a half year volunteer work placement position under the supervision of Professor Bronwyn Kingwell and her team, that allowed him to enhance and develop his experimental skills both in a preclinical and clinical setting.

In 2019, Crisdion graduated from Monash University's Central Clinical School with First Class Honours in Biomedical Science. He completed his honours project in the Cardiac Cellular Systems laboratory at the Baker Institute, under the supervision of Dr Alex Pinto. Since then, he has been awarded a government-funded PhD RTP stipend (formerly known as APA scholarship) through La Trobe University.